DIEM follows the OLCC and CCC regulations regarding access to cannabis. You must be at least 21 years old to visit this site.

Please verify your age to enter.

Why Weed Makes Some People Anxious

It felt like I was hit by a freight train. Nearly two hours after eating a weed brownie, everything suddenly started to spin. My vision grew blurry and my hands began to shake. It almost felt like an out-of-body experience.

Truth be told, I had never experienced a panic attack or anxiety of such magnitude before. Every passing minute felt more like an hour. I lay on my bedroom floor and turned on soft music, hoping to fall asleep. But instead, my mind continued to race with extraordinary speed.

My experience that night was a little surprising, to say the least. After all, so many of us consume cannabis in search of mental relaxation and well-being. But if you spend enough time around weed, chances are you know someone just like me, a person that loses their mind because it makes them paranoid or fills them with anxiety. Maybe that person has even been you. But why does this occur?

The association between cannabis and anxiety is a rather interesting one. As widespread as this public knowledge seems, little research has been conducted to draw any specific conclusions. Most studies have been based on self-reports, where cannabis users respond to questionnaires that try to draw a link between how their cannabis use affects their anxiety levels.

Some research touts weed’s ability to produce positive mental effects, but a growing body of evidence suggests this isn’t the full story. Let’s take a closer look at cannabis and anxiety to determine what’s really at play.

How Pot Gets You High

Cannabis interacts with your body through a complex structure known as the endocannabinoid system or ECS. Of the many roles the ECS serves, one of its goals is to pump the brakes by releasing neurotransmitters known as cannabinoids—chemical compounds that bind to specific receptors throughout your body and brain. When we’re wired and hyped up, these cannabinoids are released and a signal is sent that tells us it’s time to chill out.

A 2014 study conducted by Vanderbilt University showed that many of our body’s cannabinoid receptors are found in the amygdala, a part of the brain that regulates anxiety and the fight-or-flight response. This is where cannabis comes directly into play.

Contained within the cannabis plant are a number of organic compounds known as endocannabinoids. Much like the cannabinoids produced by your own body, endocannabinoids will bind to those same receptor sites to produce different effects. Cannabinoids such as THC, or tetrahydrocannabinol, will often trigger the same relaxing feeling as your body’s own cannabinoids. In essence, they too can help you pump the brakes.

But this doesn’t always go according to plan. There are factors at play that can make you feel uptight rather than totally calm and collected.

As the psychoactive compound found in cannabis, THC binds directly with your cannabinoid receptors to produce any number of wonderful effects. At lower doses, THC often makes us feel relaxed and at ease, almost as if we’re floating on a cloud. However, higher doses of THC are more likely to spark an anxious reaction much like the one I experienced.

We refer to this two-step process as a biphasic response. As you start to take in small doses of THC, the effects are mild and gentle. But the higher you get, the more likely you are to trigger the opposite effect that will induce anxiety and paranoia.

It can be difficult to determine what levels of THC are right for you when we recall that THC affects everyone differently. There’s no predetermined amount that will make us all feel giddy and relaxed.

While your tolerance to weed depends on a number of factors, we can generally say that it’s best to start with lower doses of THC. From there, work your way up as you grow more comfortable. Following this procedure makes you less likely to feel anxious or overwhelmed, and will give you a greater understanding of your limits with THC. 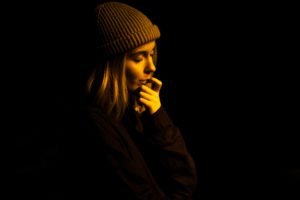 THC is just one of many cannabinoids that have the ability to influence your high. Truth be told, more than 60 cannabinoids have been identified, including another popular one known as CBD, or cannabidiol. Research suggests CBD may lessen the stressful effects of consuming too much THC.

Why this occurs isn’t entirely clear. Researchers believe CBD can bind to the same sites as THC to block or lessen the effects of an uncomfortable high. But it’s also possible that CBD acts on the receptors for serotonin in your brain, thus toning down your stress response over time.

For this reason, we recommend choosing cannabis products or strains that contain higher levels of CBD. While CBD content won’t be the sole factor that dictates your experience, it can help control your high to better ensure you don’t go over the edge.

Play It Safe with Edibles

Perhaps you noticed at the beginning of this post that I mentioned eating a pot brownie. It was made by a friend and I clearly failed to understand how potent it truly was.

Yet my experience with a powerful edible is rather common. Often we consume edibles that have higher levels of THC, which makes them more likely to cause paranoia. Edibles also rarely contain CBD or any other cannabinoids, so you’re missing out on some of those offsetting compounds that can keep you in check. And perhaps worst of all, edibles can take hours to kick in, which delays the high and often causes users to consume too many edibles, which can lead to a bad trip.

While dispensaries will often sell edibles that contain high amounts of THC, the directions clearly state that you should consume approximately 5 milligrams per serving to achieve a comfortable high. If you’re new to cannabis or edibles, consider starting with a little less. If you’re more experienced with edibles then you probably know what you’re doing at this point, but 10 milligrams is a comfortable dosage.

Pay Attention to Your Age & Your Mood

Believe it or not, your age and mood can also come into play as you experience a high. This is because your endocannabinoid system tends to age and change just as you do. If you smoked throughout your 20s but didn’t do so again until your 40s, chances are you’d experience a different high because your ECS developed over an extended period of time. You may notice getting paranoid now when such feelings of anxiety were never felt before.

Keep in mind, however, that it’s not only you that’s changing. Way back in the day when cannabis was illegal and grown in secret, THC levels hovered somewhere around 7 percent. Today, most strains offer 20 percent THC or more. It can even be difficult to find a strain with lower amounts of THC at your local dispensary. While you may think you’re smoking the same stuff you used to, in reality, you’re smoking decades of evolution that have made the plant stronger than ever before.

What’s more, your mood can influence your tolerance too. If you’re already experiencing stress and anxiety, weed can bring that out of you if it’s not currently under control. This isn’t true for everyone—some people have an easy time letting go and allowing weed to do its thing—but reflecting and understanding your headspace before using cannabis is important. Only do so if you’re capable of handling whatever may come next.

If anxiety hits during your next high, the best thing you can do is take some time to relax. A weed high can last for an extended period of time, but it largely depends on your method of consumption. At the end of the day, always remember that it will pass with time.

Steering clear of cannabis-induced anxiety can be difficult at times. To do so means paying mind to THC content, your method of consumption, mood, age and more. If you’re not sure how cannabis will make you feel, remember to start small and take things slow. If you continue to experience feelings of anxiousness, consider taking some time away from cannabis before coming back, whenever it feels right for you.

Shop Diem’s cannabis or CBD products at any of our online (or in-person) locations – Lynn, Worcester, Salem, and Portland.

*Statements made on hellodiem.com have not been evaluated by the U.S. Food and Drug Administration. These products are not intended to diagnose, treat, cure or prevent any disease. Information provided by this website or this company is not a substitute for individual medical advice.